My friend Nitya called me recently to remind me that it's been almost 30 years since SOS Sarawak - a non-violent direct action to bring attention to the destruction of the rainforests in solidarity with indigenous peoples, exported to feed consumer appetites for cheap tropical timber. 8 of us 'global citizens' climbed cranes loading logs onto ships bound for Japan and ended up spending 2 months in jail in the Sarawak town of Miri.

It's a big story. A good story. A sad story.

We were (are) right all along, we were speaking the truth - even as naive and idealistic were to hope that change would come.  Maybe it's still coming...Anyway, at the very least we thought it may be worth recording and  sharing this story with our children (especially when they ask us what we did to save the Earth).

By some miracle, the termites didn't munch into the box of papers I had stashed away in the leaky caravan at the back of our land and I'm just starting to enter in some of the words again. 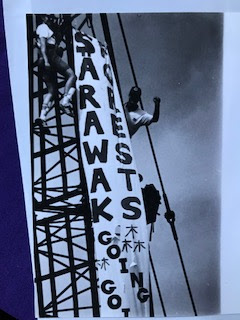