'She sang to communicate...'

Slowly, going through the pile of news clippings and papers - entering some moments...

We were deeply humbled when local lawyers came forward to volunteer their services to defend our case ('Criminal trespass with intention to annoy') with court proceedings lasting several weeks (I kept copious notes!), in which time Angie and I were out on bail in the timber town of Miri.

While other news headlines had Prime Minister Mahathir calling us 'eco-terrorists' - 'declaring world war on Malaysia' - this was closer to reality. I climbed up with a guitar and an 'Earth' flag and spent the day singing.

Borneo Bulletin Friday 9th August 1991
by Philip Q
Miri - The Swedish environmental activist Anja K. Licht told the magistrate's court here she sang to communicate to the onlookers at Kuala Baram during the demonstrations on 5 July to protest first in felling in Sarawak.
"I took out my guitar and started to sing as it was my intention to positively and in an entertaining way bring forth the message about the destruction of forests and the planet itself," she said.
Licht is jointly charged with Briton Angela Zelter with criminal trespass at Kuala Baram on that day. She described the tone of her music as gentle, pleading and entertaining. She said the onlookers waved to her and some asked for more while others looked confused.
"They were smiling and waving:, she recalled.
Anja also explained to the court that the flag she attached to the derrick on the barge at Kulal Baram on that day was called the "Earth Flag" which was given to her in Japan.
"The picture of Earth in the centre was taken from space and its significance was to fortify our intention of coming here as global citizens and no different from anybody."
Her intention was to share equal responsibility for the world's environmental problems and global consequences which transcended political boundaries and short term economies, she noted.
Replying during cross examination by prosecuting officer, Chief Inspector Jacob Wong, she denied that she went on board the barge before 8:30 am and her intention was to annoy the complainant who alleged in his testimony that she was there with Zelter by 7:15am.
Anja also told the court that she had been to Sarawak more than once.
Angela Zelter told the court that it was decided by the group of eight activists to demonstrate against logging when they met other members of the SOS Sarawak group at Batu Niah.
"We all decided that the demonstration should take place at 8:30am on 5th July in three separate places at Kuala Baram, which is the international loading centre for logs," she added. 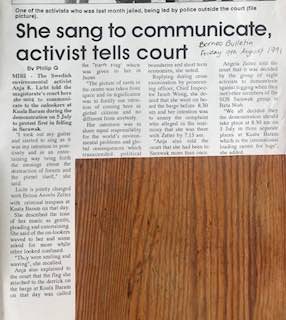 'Green Idealists
- Jailed duo speak of concern for Sarawak.'
Borneo Bulletin
Sat/Sun 26/27 October 1991
By Philip Q
MIRI - The two foreign activists who were convicted for criminal trespass while staging an anti-loggia demonstration in Kuala Baram spoke of their experience in Sarawak.
Briton Angela Zelter said "we are a mixed bunch of rather idealistic environmentalists, with a fund of knowledge on many of the issues, who deeply care about the fate of all forms of life on this fragile planet.
"We come from different industrialised countries from a variety of backgrounds to protest the login activities in Sarawak. We have never met before," she said.
She blamed the industrialised countries and third world countries for the problem of the destruction of the fragile eco-system described as the best remaining in the world.
"Our countries get rich on your resources and out multi-national companies don't care what happens to people, animals, land, water or air as long as the profit keeps rolling in ." she said.
"Logging has done irreparable damage to the genetic pool in the proposed Baram district biosphere and Penans, probably, would not like to be confined to such a small area," she said.
She suggests alternatives:
Recognise customary land rights of natives; restrict login to certain secondary growth areas, away from primary forests and unsustainable forests; use the bulk of oil revenues in Sarawak and invest in village and town level bio-gas, solar energy production, infrastructure and diversify the economy.
Admitting that industrialised countries had been responsible for the many major environmental problems of this era, she clarified that activists had also been very active in their respective countries in pressuring their governments and people to change their lifestyle.
"Many of us had been imprisoned in our own countries for standing up against pollution, environment damage, nuclear weapons and others. And we have learnt that multinational companies moved around the globe," she said.
"As we impose greater pollution control in our countries, they moved to the Third World countries where the people and governments are less vigilant and poorer to resist,"
"The knowledge we have gathered of birth defects, respiratory diseases, long term poisoning and damage to land and water are hidden from our brothers and sisters in other parts of the world," she said.
Angela Zelter and Anja Licht expressed sadness at leaving Sarawak, after having been in the state twice since June.
Licht composed a parting song of their experience with the Judiciary where the courthouse was described as a second home. It is entitled "We love you Justice Ong". 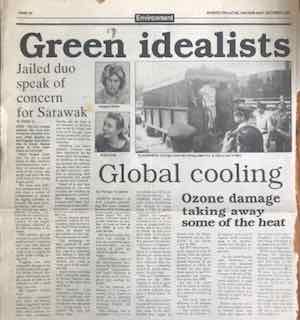