A month has already passed by in 2011. I think I want time to stand still. And yet, the way I seem to cope best with despair is to ‘do’. Our slohas living experiment here is all about ‘doing’ - it is constant, it is physical, it is dirty and I go fast (because I want to do so much more than just building this place). So, as usual, I feel like a bad Sloth!

It is so hard to bridge the gulf between the majority of people living in the ‘rich’ world in an urban, comfortable, protected situation, so distanced from the sources of life like food, water, energy and where most experiences are now coming as ‘virtual’ reality – to the hardcore facts of survival. Some of my best friends who are so inspired by ideas like permaculture now realise that to provide enough food for your families from your garden means a lot of hard work on so many levels – it is so much easier to use money to buy what you want when you want it (unless you are part of the majority living in 'poor' countries who have no choice)…

But, we are supposed to work (aren’t we?). Our body (and brain) rejoices when it is used fully, muscles building, circulation flowing, oxygen pulsing, circuits connecting – being alive…And our bodies have evolved to cope with a bit of dirt, bacteria and even parasites...aren't our attempts to sterilize and control our environment part of the reason we are becoming so weak and unwell? For me being surrounded by nature with the freedom to create at my own pace is yoga and meditation combined.
Kae’s visit here (Kae has now decided to study English on the Gold Coast) has helped me understand more about how challenging it is to ‘shift’ from what is comfortable to a completely new experience. It has also made me realise I take on too much and need more help and support if I want to ‘do’ it all - must work on this for the year 2011!

In the past two weeks here are a few of our ‘highlights’: 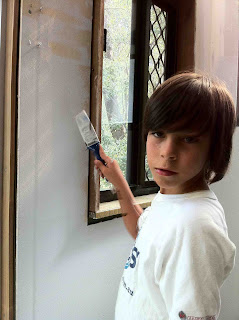 Pacha decided it was about time we painted the toilet walls. I bought some left over paint from the ‘dump’ shop and Yani helped splash it on. Since Kae has visited we have created a seperate ‘pee’ area (where urine can be collected to age and then feed the citrus trees). The compost toilet has very little smell and part of the reason is that we try to reduce the addition of urine in it where we can. 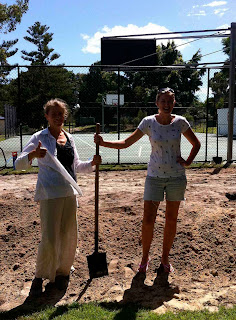 As part of my P and C (PTA) responsibilities, we have been helping the construction of the new playground at the school. It really is amazing how few parents offer their help, especially when you think that all the children will benefit from having a playground (and 90% of parents wanted one). I was so impressed by the Principal of the school working hard with us, digging holes and carrying concrete for the posts, on the hot summer days. 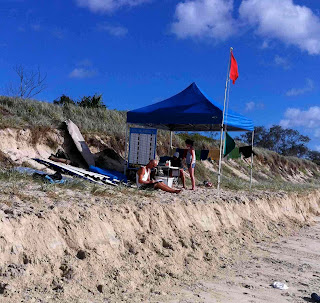 This is the year we surf! Pacha, Yani and I signed up for the Iluka boardriders club. 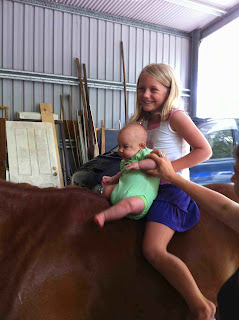 Ollie has been continuing to enrich the community with his gentle presence. We have had a few ‘horsey’ days for children. He has also had his youngest rider yet – Sylvie, 3 months old. 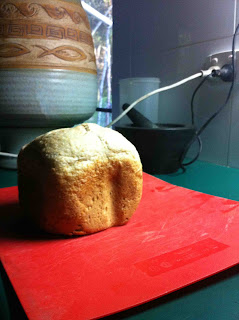 Minami left her sourdough starter (passed on from Tomoko) and I have been making loaves successfully in the bread maker. Yes, it is a compromise – I am using the solar electricity to ‘power’ a machine (secondhand given by my friend) to save time and energy to put into other things. Pacha and Yani love the flavour and want to have this bread for their school lunches.
投稿者 anja 時刻: 1:56 PM