The kids love surfing - So we go surfing. 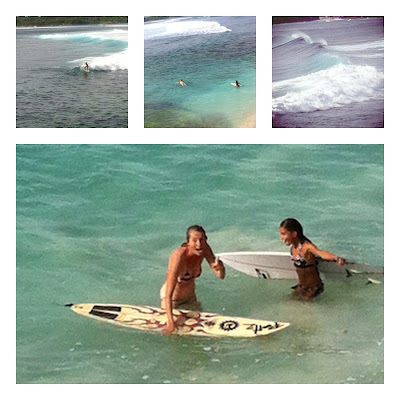 Surfing was one of our main reasons to come to Bali - the place world famous for an incredible range of waves along with warm water, gentle culture and low cost living. Now our time is almost finished here and I share some of the diary notes I have tapped into my phone along the way (mostly while waiting for the children to come in to shore!). For Pacha's surfing stories - take a look here: http://pachalina.wordpress.com/
1 Feb Serangan
Grounded again while waiting for the kids to come in from the ocean...it may never happen!There are at least 50 people out there trying to catch the same infrequent waves, but that doesn't seem to stop the kids from waiting, trying, waiting...it's been 6 hours...sigh...Yani told me later that he was helping a local grom get onto the waves.

It is yet another morning of beautiful clear sky day. We were up at dawn to check on the waves...nup, not ready yet - like checking on some bread in the oven, or a fermentation process of some kind - but the surf is even less predictable unless, perhaps, you are a meteorologist and are watching the weather satelites...

It teaches patience and humility, it teaches living in the moment and seizing the opportunity when it arises.

A couple of days ago we had one of our best days ever - setting off on a motor scooter: 2 kids, 2 surfboards and one mother...we drove so slowly - about the speed of bicycle riding - laughing and singing and joyfully interacting with the people we passed along the way. Their advice was 'slowly, slowly' - but it was hard to imagine going much slower than we were - so we laughed some more!

This island of Nusa Lembongan doesn't have cars, just motor scooters and a few small trucks. To reach an even smaller island of Ceningan, you must cross an 80 metre suspension bridge just over a metre wide, the timber slats clack clacking away under the wheels. The whole way we chorused: 'woh, woh, woh' interspersed with laughter and joyous whoops as we made over without incident.

We kept riding along the bumpy, narrow tracks up to the most beautiful point where people jump off the cliffs into manta ray filled crystal blue waters. A little further along was a 'secret' surf spot - big, fat, powerful waves - shifting through shades.

I get into the water - there are big waves, and I have a big wipeout, but just being out there giving confidence to Pacha to catch a wonderful wave...there is still a place for Mum!

Unlike most kids who escape their parents to take on more risk - Pacha and Yani seem to like me near when they challenge their own fear boundaries...feels good.Pacha describes the amazing sensation of catching a wave over crystal clear water looking down at stunning coral as she glides by...priceless moment that makes life worth living...
10 Feb

Swimming with giant manta raysChildren fearless in the great heaving ocean - bountiful ocean...some rubbish floating around, an image that must come to mind when we see any packaging of any kind...Kids connecting without language with French kids along the way...So joyful - always the sound of laughter...


15 Feb Bukit Peninsula
Our friend and surf guide Damien eventually finds us waiting on the roadside for a full day of wave searching on the holy grail of concentrated surf spots - the Bukit Peninsula. Uluwatu, Balangan, Dreamland - wave after wave of lefts and rights, barrels and power any variety of levels. At this time of year (monsoon) it's not supposed to be that good - and it's partly why we've stuck to the east coast, but it looks fine today!
The kids have paddled out with Damien, butterflies in their stomachs as always, so excited to get into the surf - they are so far away I have no hope of picking them out of the crowd, but I trust that they're getting some waves...I've bought one of those waterproof pouches so I can take photos of them in the water - leave it till later when the wave is easier to get to!

UluwatuThe highest water level from the tide in the cave Damien has experienced, I watch my children disappear into the shadows, water crashing on the rocks - my heart in my mouth as I encourage Yani that it's going to be fine but inside I'm doubtful that he will go ahead...And he's gone!!!

My heart is beating furiously now as I scramble up the hill to see if they made it through...there they are! No looking back - paddling into the deep blue horizon. Pacha gets one of the first long waves and I can see she has taken Damien's advice to keep her left hand still - she's slowly getting the style and losing her windmills! 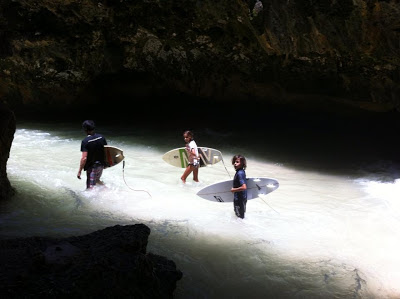 Outstanding story there. What happened after?