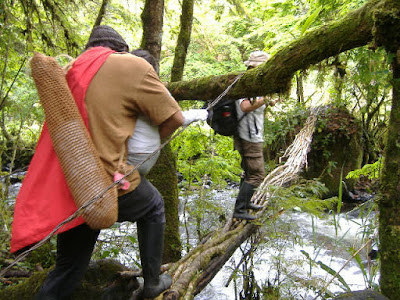 This message is powered by the sun! Yes, finally the solar panels are connected to the inverter and charging up the laptop. Like everything in Ecuador it took about three times longer than expected. And now that I have the computer here, ready to write, I find it so hard to stop doing the hundred other small but important tasks that keep El Milagro and our simple lives ticking along – picking coffee, harvesting peas, de-husking peas, washing clothes, making paths, planting, digging, pruning, cooking, helping the kids with school work, washing clothes (yes, again!), putting on roofs,
fixing toilet houses…there is never really 'nothing to do'. Yet most of the activities are somewhat like meditation – mundane and repetitive so that my mind to drift backwards and forwards in time, reflecting and then making plans and then being blissed by the sight of an incredible looking insect or bird.

It's interesting to look back on the first lists I made of things that needed to be done here and to watch as the priorities have changed. First I thought we would really need to put glass in all the windows where we sleep/live upstairs in the stone house. Then we had a morning visit by a beautiful hummingbird and at night the fireflies flash in different parts of the room – so the glass has remained packed in cardboard and we put an extra blanket on for the cool nights.

We did meet one important priority - replacing the sugarcane grass roof of the round house. Hooray – its finished! Between Luis and I and about 4 other occasional workers, over the course of about 4 weeks, we stripped off the old roof – to be used as mulch for the new gardens. In Australia sugar cane mulch is bought in the big hardware stores by aspiring city gardeners – here they would have burnt it if I had not stopped them and assured them that it would be good for the garden. It seems that summer has finally arrived –
more than a month late – and it will be good to keep more moisture around the new seedlings (brocoli, silverbeet, chili, tomato, coriander, parsley, white carrot) that we have recently planted out.

The unusually wet weather was the main topic of conversation by most of the people here for weeks. People had never remembered another time like it. It affected the flowering and harvest of important local crops including coffee, peas and beans. Local people commented on the impact of climate change – and I bristled at the knowledge that this problem, caused by us rich consumers in the energy wasting 'developed' countries, means suffering for the poorest of the poor. We can go out and buy our food, while people
here have less choice, if the harvest fails because of too much rain, they don't have enough product to sell and they have less to eat.

Everyday we are reminded that we are truly in one of the most beautiful parts on the planet. Pacha and Yani are always discovering new bugs which they bring to me in glee. The sight of a big spider (even in the house) is not cause for alarm but an exclamation of surprise and joy. We have seen a few snakes, including a big false coral snake, resplendent in orange, red
and black and a small black snake that Pacha brought to me wrapped around a stick. I guess she thought that my directive never to touch a snake didn't apply to snakes less than a meter in length!

Anyway, it didn't seem to be dangerous and we quickly put it back where we found it. We have seen the famous cock of the rock bird near the river, flashing red in the trees. We watch the squirrels in the trees sharing the hundreds of guavas with us and our horse Shanti. Yesterday morning we saw what must have been an opossum
ambling along the newly laid stone path. And about a week ago Pacha saved a baby duckling at the river side. Its mother (or father) was a beautiful orange and grey blue colour and turns out to be very rare here. A dog (puppy really and very cute that the kids named ´fluffy´) that had been following us to our regular swim in the river ran ahead and grabbed the duckling in its mouth, Pacha wrestled it out. We tied up the dog (with my Thai pants which promptly broke as the dog eventually struggled free) and put the
duckling back by the stream, observing from a distance as its parent came back…

Pacha and Yani have both been practising their riding skills on Shanti everyday. Despite being a fullblooded stallion, Shanti follows Pacha around like a dog and waits every morning at the gate in the paddock for Pacha to bring him a bucket of guavas that have fallen during the night. Local people here have never seen horses that get brushed daily and cuddled and kissed…but then, they also do not expect stallions to be so placid with small children. This morning we saw Shanti do a hilarious thing. He stood outside the round house where there is a large window and he can see his own
reflection. He started neighing and whinnying and trying to nip the window – I guess Shanti sometimes feels lonely here with only ocassional visits of other horses for company.

During the past month we have also been able to meet up with many old cherished friends from Intag. A few weeks ago we got a lift with our neighbour Carlos Zorilla and a car load of other neighbours to the hotsprings at Nangulvi (about 30 mins away by car) . The occasion was an agro-ecology fair (organised by the 'consortio' made up of DECOIN, AACRI and the Women's association) that reminded me strongly of the expos we had
organised in Cotacachi.

About 50 stalls with information, ecological products and delicious food, talks, local musicians and of course the hotsprings. Pacha and Yani spend 3 hours in the water while I met many old friends from the past. So many wonderful new initiatives have been happening here, despite (or because of?) the threat of mining. It has been hard for many people, yet I felt a sense of real optimism and solidity about the initiatives.

Projects like the coffee and kabuya handicrafts have proved to be a real success and there are a range of new initiatives that mean more diversity in the potential to provide a sustainable income and healthier lifestyle. It was a great fair, though too expensive for many local people to participate ($2 per person when a daily wage is only about $7 per day) and it was hard to reach the fair without your own transport (only a few overloaded buses travel the road each day).

After Pacha and Yani could finally be coaxed out of the water we ate lunch served on non disposable plates – a real reflection of commitment to minimising environmental impact, pretty unusual in Ecuador.

Every two weeks or so we have made the 1 hour walk and 2 hour journey by bus on the dirt road to the market town of Otavalo. We book a room at a cheap but clean hostel, where we shed the sweaty muddy clothes and shoes, soak in a steaming hot shower and where the kids watch discovery kids in Spanish (one of the best ways they have been able to pick up some of the language) while I work on the first floor in the internet café, reconnecting with the world.

We emerge to have $1 pizza at the restaurant on the corner and the
kids start to beg me for the multitude of temptations we have not seen in the cloud forest – ice cream, lollies, toys, hair clips, shoes, gloves…and I remember why it is so very peaceful in El Milagro!

I'm finishing this up as the kids are sleeping here in Otavalo. For most of the past week one of us (Pacha, Yani or I ) have been running a fever – some kind of nasty flu. I made the decision to take the kids out to Otavalo in case any of us got any worse and we needed medical attention. I ended up taking Pacha to see the doctor as her fever entered a 5th day.

Normally I see a fever as a good sign that the body is defending itself, but Pacha just doesn't have the energy to spare. A couple of earlier rounds of diarrohea have left her underweight, So for the next couple of months my main focus will be on nourishing my children. And that's how it seems to go for us in Ecuador – a pendulum swing of wonderful, life enhancing experiences, then a sense of fear and vulnerability. We will make it, but it is sometimes tough to live a hardcore slohas life!
投稿者 anja 時刻: 3:21 AM